Most people don’t like the idea of killing rats and mice. But if you leave them to reproduce and infest your garden, they can cause a lot of havoc and damage. They’ll eat seeds and plants, and with time, they’ll move into your house.

Traps and other non-lethal methods work by they are often too slow and ineffective for large rat populations. They can’t keep up with the rats.

Rodenticide or rat poison is the most effective way of keeping rats and mice out of your house, yard or garden. They kill large rat infestations within a few days and some powerful poisons can eradicate rats literally overnight.

In this buying guide, I recommend the best rat poisons for your garden in the UK. Most of these poisons also work great indoors. Just make sure you keep an eye out for dead rodents that might stink up your home.

I also explain the different types of rat poisons and how to choose the most effective one for your garden.

Features to Consider When Choosing Rat Poison for Garden

A. Type of Poison

Rat poisons are classified generally based on the active toxin they contain. Different toxins have a varying level of toxicity. So one rat poison may be more powerful and kill rats quicker than another poison.

The most common active ingredients are difenacoum, bromadiolone, difethialone, and brodifacoum. All these are anticoagulants, meaning they kill rats by interfering with their natural blood clotting mechanism, leading to fatal internal bleeding.

These are second-generation rodenticides. They are more powerful and act faster than earlier first-generation rat poisons. So you have to be very careful to follow usage and placement instructions.

All these ingredients are single-feed, meaning a single dose is enough to kill a rat.

However, some manufacturers use a lower concentration of the toxin in bait such that rats need to take multiple feeds for the bait to be lethal. This reduces bait shyness, where rats may detect poison in bait and refuse to take it.

B. Type of Bait

Rat poison doesn’t work on its own. It needs bait.

The bait attracts rat to feed on it and thus ingest the poison. The best baits are made from palatable ingredients like grains and wheat. Block baits made with wax do work to attract rodent, but they are not as effective (delicious) as grain or wheat bait.

Also, check the amount of bait that’s provided in the package. If you’ve seen just a few rats scampering across your garden, a few sachets of pellet or block rat poison will be enough to wipe them out.

But if you suspect there’s a big rat population in the house or garden, you may need several packs or boxes of poison to eradicate them all.

For safety and maximum effectiveness, it’s best to use rat poison with a bait box or bait station. You put the poison in a box that rat can get in and out of.

This gives only rats access to the poisoned bait and protects non-target animas like dogs, birds and cats. It also keeps out kids.

Some rat poisons come with a bait box included. But in most cases, you have to buy the box separately.

When looking for a bait box, look for one that’s lockable for added safety.

Make sure the rat poison you buy is waterproof. If the label indicates the poison is suitable for outdoor use, it is likely weatherproof. It will not be damaged by rain, sunshine and other elements.

Do not buy rat poison meant for indoor use only. It likely will not withstand outdoor exposure. 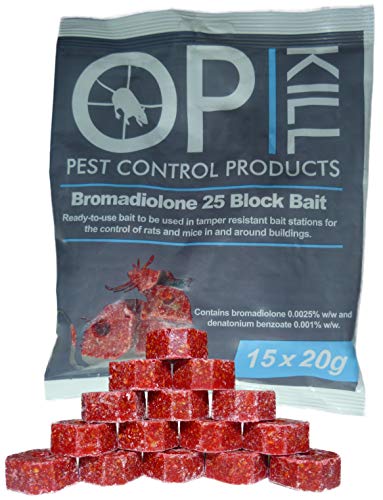 Opkill Rat Poison & Mouse killer is a multi-feed rodenticide with bromadiolone as the active ingredient.

You’ll likely have to replace the blocks 2-3 times. Each time the rats carry away the blocks or eat them, they ingest some of the poison. After the third time, you’ll likely find the block untouched because the rats have died.

The block baits are made with palatable wax. In addition to bromadiolone, they also contain denatonium benzoate, a very bitter compound that prevents kids and pets from swallowing the poison (but doesn’t discourage rats from eating the blocks).

For best results and safety, use the Opkill Rat Poison blocks with a bait box. Individual blocks come ready to be fitted onto a bait box rod. Note that a bait box is not included with the poison. 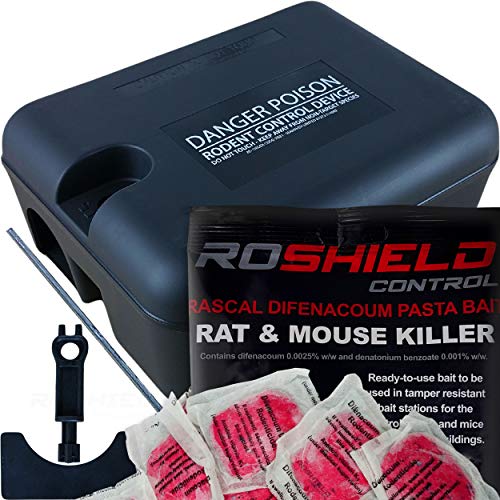 If you want a complete bait kit, with the bait and bait box included, I recommend the Roshield external rodent bait box kit.

It comes with 15 bait sachets (each with 10g of poison) and one bait box. Each sachet contains difenacoum rat poison as well as denatonium benzoate to discourage kids from ingesting the poison.

This is a multi-feed rodenticide, so it’ll take several ‘takes’ before the rats succumb to the poison.

The bait box is lockable and comes with a key, a bait divider to keep bits of dropped bait from getting outside the box where kids and pets can eat it, and a metal rod from which you hang the bait.

Simply thread the sachets onto the rod and hang it inside the box. Lock the box and place it along an exterior wall. You can also place the bait box inside the house or in the garden shed if that’s where the rats are residing.

How long it takes to eradicate the rats depends on how many of them there are. Most customers found they re-baited the box 2-3 times before rats stopped coming to collect the bait, meaning they’d died.

For large rat populations, it may take longer. You can order larger packs of 2 boxes and 30 sachets or 3 boxes and 45 sachets if you have a large rat infestation in your garden. 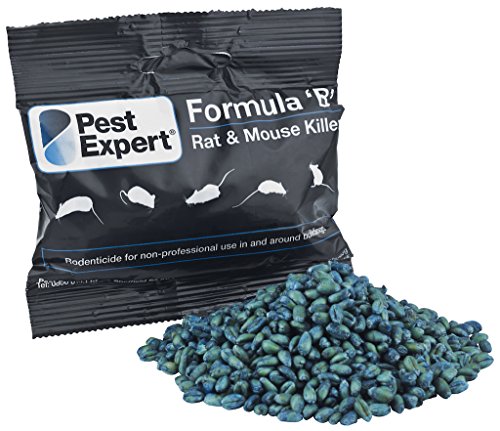 Unlike other rodenticides that require multiple feeds or takes, the Formula B+ is a single-feed poison. Once the rats eat the bait, they ingest enough poison to kill them. Most customers say they had to put out the bait just once and the rats never came back.

You can set out the bait in trays, but for added safety, I recommend using it with a bait box. Considering the Pest Expert Formula B+ is more powerful than most rodenticides, you’ll definitely want maximum safety for pets and kids. 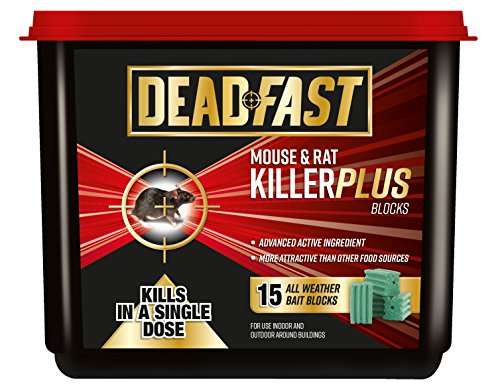 Deadfast is another good choice if you are looking for a fast-acting rat poison that kills in a single feed.

To increase palatability, the blocks are made with wax and whole grain. Furthermore, the blocks have a ridged surface, which the manufacturer says encourages gnawing from rats and mice.

The blocks are weatherproof and can withstand a wide range of temperatures (from -15°C to 50°C) as well as high-moisture environments.

The pack contains 15 blocks. Each 20g block is contained within a wrap. You don’t need to unwrap the blocks; rats can easily chew through it. Simply insert a metal rod through the holes in the blocks then set them in a bait box.

The manufacturer recommends 2 blocks per box. If you are using more than one bait box, place the boxes 2-3 metres apart. 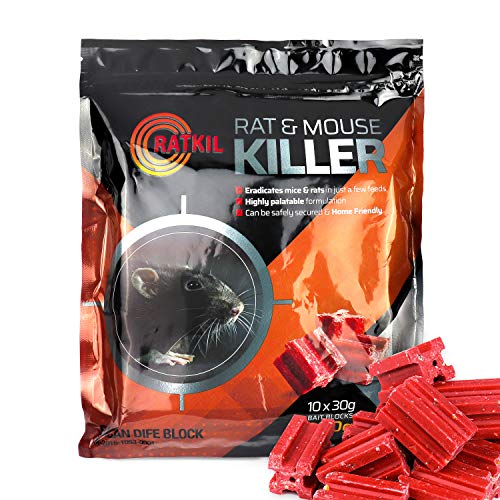 RatKill is a good choice if you are looking for a cheaper multi-feed rat poison. These bait blocks contain difenacoum, a poison that kills rats over several feeds.

To increase palatability, each 30g block contains several cereal and sugar so it tastes like food. You’ll need to keep adding bait to the bait box several times until you find the blocks uneaten.

For most people, it took just a few days to eradicate their entire infestation.

The blocks are weatherproof, so you can leave them outdoors, ideally in a bait box. You can still leave the blocks out in the open, but only if there aren’t kids or pets around who can ingest them.

The blocks already have holes for easy mounting on a bait box metal rod. They also come wrapped to avoid skin contact (no need to unwrap them).