Home
Guides
How To Get Rid Of Hogweed
Check my selected products =>
Top Picks!

Gardening enthusiasts often grow hogweed due to their beautiful white flowers and tropical-looking leaves. However, this kind of plant can be highly invasive and do a lot of harm to the environment and human.

With an average height from 1 to 5 meters, it can prevent the growth of native species and cause serious burns on your skin when in touch. Thus, if you identify any of them in the garden, it is important to take immediate measures to get rid of this invasive plant.

What is giant hogweed?

Originated from the Caucasus Mountains and Russia, giant hogweed was first introduced to Europe and the UK in the 19th century and became a key plant in most ornamental gardens across the country. After a few decades, it quickly spread into the wild and was seen as an invasive species in the UK due to its negative effects on the wildlife and humans.

Because of seasonal flooding, tolerance of complete shade, and strong early-season growth, giant hogweed is extremely invasive. With its rapid growth and large size, it can dominate stream banks and invaded ravines quickly. This eventually decreases the available habitat for native wildlife and plants.

Giant hogweed can also be very harmful to humans because its sap has toxins which might cause serious dermatitis. Possible effects include blistering, rashes, welts, or pigmented scarring.

How to identify hogweed 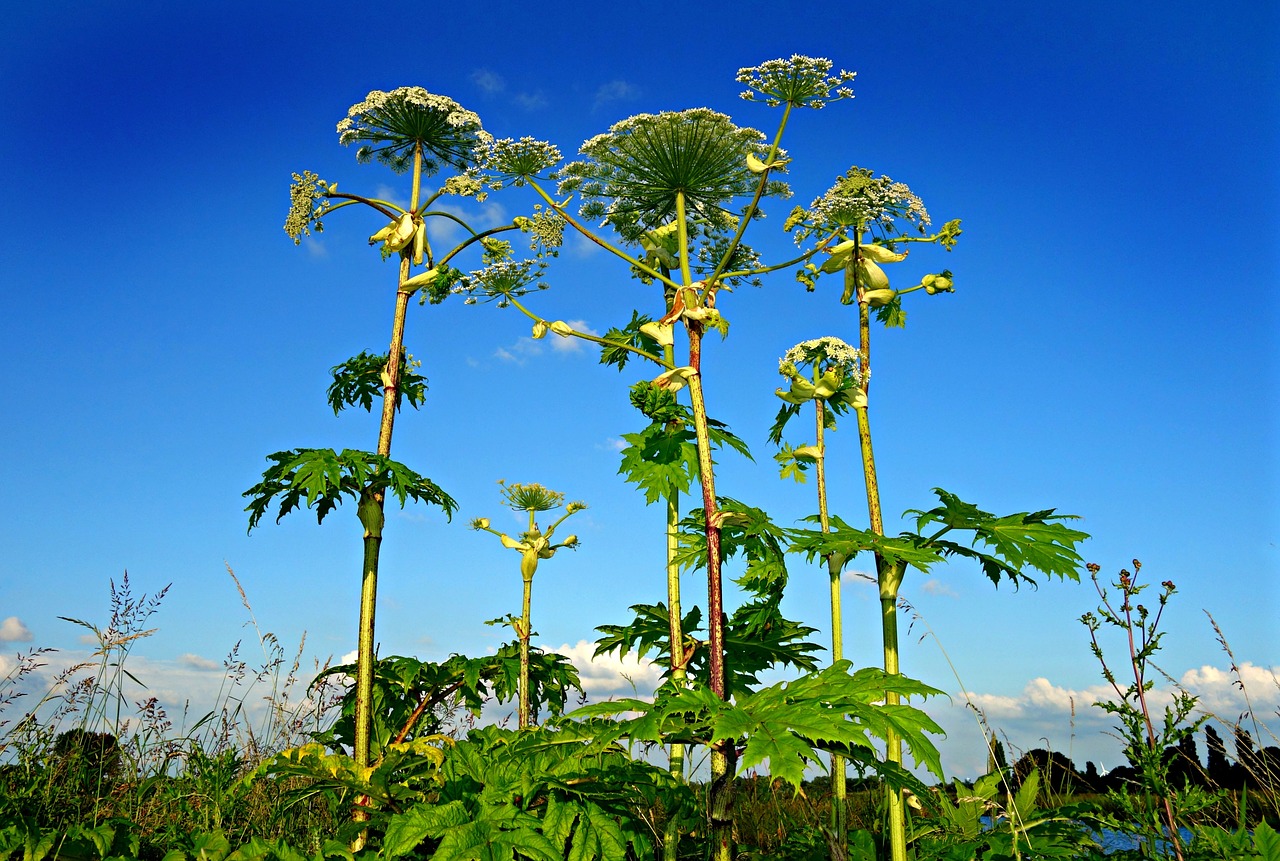 Giant hogweed can be easily mistaken for many species. Here are a few main features to help you identify this plan:

Watch this short clip to learn more about identifying hogweed in your property:

When removing hogweed, avoid touching the plant with your bare skin. Instead, wear protective gear such as boots, pants, long sleeves, gloves, and glasses to protect your body. It is better to choose synthetic water-resistant materials rather than linen or cotton fibres, which could soak up hogweed sap.

It is advisable to implement the removal on cloudy days to avoid sunlight. Keep eye-wash, soap, and water near the working area in case of sap exposure. After the removal, you should wash the equipment immediately with water and soap to get rid of soap.

If you are exposed to the sap, thoroughly wash the affected areas with water and soap immediately. Stay away from direct sunlight for at least 2 days. If any reaction happens, use topical steroids to ease discomfort and reduce the severity. Also, visit a physician for better medical care.

How to get rid of hogweed

This is a labour-intensive but very effective method to get rid up hogweed in just one treatment. Thus, it is great for small infestation or a single plant. You can also use this method for large infestations when you are more people and time.

Basically, you shut cut its taproot around 15 centimetres under the ground level with a spade. Make sure to separate its thick stem base which bears old leaf scars. It is simplest to do this task in early spring before those leaves get large.

You can easily hand pull young plants between April and May when the soil is moist and loose. During this time, the stems aren’t woody and can break easily. You should pull them gently to avoid removing full roots. A trowel or some small hand tools might be helpful. Keep in mind that this method won’t work for mature hogweed because its taproot can be too large. Also, you should be really careful and wear safety gloves (here are few) to keep the sap from touching your body.

Removing the seed could also be an effective method as the hogweed will die soon after flowering or setting seed. Keep in mind that timing is the most important factor in this process. If you cut too early when the plant is flowering, it will form new flowers on lower branches.

Instead, it is advisable to cut the seed heads once they have formed and flowers aren’t visible. Also, avoid scattering the seeds to the surrounding area.

Ploughing is probably the most effective mechanical method for removing giant hogweed, although it needs to be performed for many years because large roots could regrow. It can eradicate the plants from infested fields and remove the stock of roots.

Deep ploughing would considerably lower the germination of seeds as the upper layer is buried and the majority of seeds are located in the top 4 centimetres of soil. Keep in mind to clean the ploughing tool before using in other areas to avoid spreading the seeds.

Giant hogweed is vulnerable to systemic herbicides like triclopyr or glyphosate. Thus, applying these products can be a cost-efficient and effective way to get rid of this plant. Systemic herbicides can be absorbed by its leaves, then move into the roots to prevent regrowth.

Make sure to read the label instructions carefully and apply the recommended dose. There is no benefit of using a higher dose. The best time for herbicide control is between April and June when the hogweed leaves are still actively growing and green.

Generally, you should cover all leaf surfaces, but avoid spraying to the pints which liquid drip off. Consider using dye to make it easier to track. It might take at least 1 or 2 weeks for the treated plants to die.

Grazing by goats, pigs, sheep, or cattle is a very efficient method to get rid of large areas of hogweed. Since these animals like young plants, you should start the gazing in early seasons when the hogweed are still developing.

In dense areas, it is recommended to have a single mow or cut to allow other plants to grow so that your livestock could enjoy a mixed diet.

How to dispose of hogweed

Since hogweed is classified as controlled waste, you need to dispose of this plant properly after removal. While this could be achieved by burning or composting, a large amount should be placed in large heavy-duty mesh or plastic bag and bring to a licensed landfill.

Otherwise, you could get fined or sent to prison for disposing of non-native and invasive plants. When in doubt, it is advisable to check the regulations or contact your local authorities for the right guidance.

If you need more gardening advice, here is our guide on wild garlic in your garden.